DENVER, Dec. 28, 2015 – Every holiday season, millions of Americans ring in the New Year with a common goal: weight loss. Whether motivation stems from wanting to fit into last year’s jeans or simply wishing to be healthier, data shows “staying fit and healthy” as the top New Year’s resolution of 2015 for Americans, followed closely by “lose weight.” According to a study done at the University of Scranton, of the 45 percent of Americans who usually make New Year’s resolutions, 64 percent maintain them past one month and 46 percent past six months. Only 8 percent of people are actually successful in achieving New Year’s resolution goals.

Living a healthy lifestyle is attainable if a person has access to the correct educational tools and support. In the United States, $40 billion is unnecessarily spent on weight loss every year, a number that could decrease exponentially by utilizing free community resources such as the Weigh and Win program (primarily funded by Kaiser Permanente). Not only would obesity rates decrease, but the amount spent on medications for obesity related ailments such as type 2 diabetes, high cholesterol and heart related issues, would follow suit.

“To compliment my healthy living New Year’s resolution, I joined Weigh and Win in January of 2014. My father passed away at 73 and my mother at 78; I had just turned 70,” said Weigh and Win success story Suzanna Spears.  “Weigh and Win was not only a free resource but a daily reminder of the commitment I had made to myself. I have lost weight and built muscle and stamina. People even comment on how I look better.”

Spears has since competed as a walker in 10 5k’s, 9 of which she has taken first place.

“The greatest benefit is knowing that, as I approach my 72nd birthday next month, I am a different person and have improved my quality of life. I still check-in with Weigh and Win daily,” said Spears.

Weigh and Win has helped thousands of Coloradans reach their goals. To date, the program is made up of 70,000 participants. The average weight loss for a successful participant after one year in the program is 17.7 pounds.

“My husband Ron and I were looking at our weight as a barrier for us enjoying life including traveling, going anywhere seats may be too small or where we may have to walk too far,” said Weigh and Win participant Julie Brown. “Since our successes with Weigh and Win, Ron has been taken off full-time oxygen and diabetes medication and is working full-time for the first time in a decade. Weigh and Win made us accountable to our goals while receiving daily, positive reminders, tips and money to boot!”

Weigh and Win is available for free to all Coloradans 18 and over. Sign up for an account today at www.weighandwin.com. 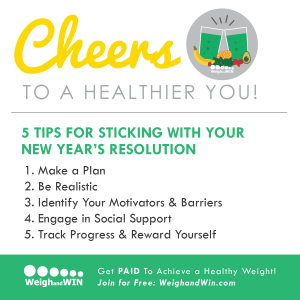 Manage Cookies
To provide the best experiences, we use technologies like cookies to store and/or access device information. Consenting to these technologies will allow us to process data such as browsing behavior or unique IDs on this site.
Manage options Manage services Manage vendors Read more about these purposes
View preferences
{title} {title} {title}